The Basbeall World Series in the USA 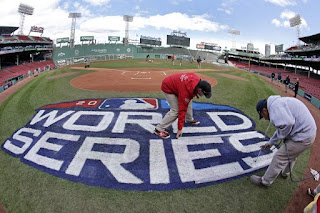 Baseball is very, very popular in the US of A. There are two leagues. There are 30 teams. There are 25 players on each team. There are millions and millions of fans. At the end of each regular season, there are playoffs. The best teams in each league play each other to determine (find) the best team in that league. This year the best team in the National league is the Los Angeles Dodgers. The best team in the American League is the Boston Red Sox. They will meet in the World Series. This 2018 World Series is quite unique. Why? Because:
1. The last time these two teams met was 102 years ago, in 1916.
2. The distance from Los Angeles to Boston is 2,983 miles OR 4,772 kilometers. That is ht longest distance ever between two venues.
3. Babe Ruth pitched in the series 102 years ago. Do you know Babe Ruth?
4. Boston had the best record in the MLB with 108 wins this year.
5. Los Angeles last won the series 30 years ago.
6. Boston has won the series three times since 2004.
Game One was yesterday. Do you know who won?
Posted by ramesrick at 8:00 AM