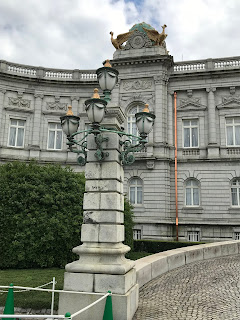 One recent adventure to Tokyo took me to the Akasaka State Guest House. Actually, I got there by accident. Let me explain.

I watched the news with interest about the abdication of the Heisei Emperor (Akihito) and the coronation of the Reiwa Emperor (Naruhito). In my opinion, It was a big decision to quit now. I think it was the correct decision. So, I know that hte Emperor lives in hte Imperial Palace in Tokyo. I have been there many times. And I learned that the Prince and Princess (next in line to be Emperor and Empress live in a place called "AkasakaGoyouchi". I am not sure, what it is but I believed that some members of the royal family live there. I wanted to find out where it was. So, I went to Tokyo, walked past the Palace and went ot Aoyama Douri. I followed that to the Goyouchi. But first I encountered a cool temple. I loitered there for 20 minutes or so and then followed the high wall to hte front of hte Goyouchi. Then I reached the front gate of the Akasaka State Guest House. Then one guard asked if I was going inside. I said of course! They showed where to buy my ticket and get in. Continued tomorrow.
Posted by ramesrick at 8:00 AM