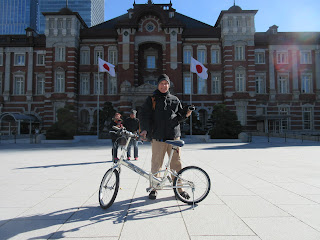 On this occasion (this time) I went to Tokyo by bicycle. Of course I went to Tokyo station by train and then I used my folding bicycle. I got to Tokyo station about 10AM on a Sunday. There are not many people on the train at that time so it was not an annoyance to others. Then I set out on a ride around the Imperial Palace grounds. I went straight from Tokyo station to the Uchi-Bouri Douri. I headed north and went to Kita-no-Maru Park. I stopped there. The walls of the palace are formidable. The water in the moat is calm and sure. I asked a police officer about the Kita-no-Maru Park. He said it was not interesting. So, I continued around the palace. I reached the area on the opposite side from Tokyo station I had never been there before. I found "Shinjuku Douri". It is Route 3 on the map. It goes straight to Shinjuku. Should I go there? No. Too far. I continued along the moat. The scenery was beautiful. I went all the way around to hte Sakura-da-Mon (Gate). There I locked my bicycle up and walked on the gravel to the place where I waited on December 23rd to enter the Palace. I wanted to hear the Emperor's birthday address that day but I was too late. Heavy sigh.