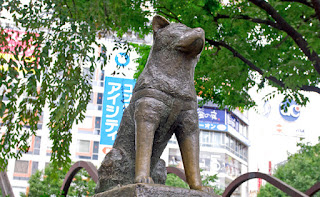 Two Fridays ago, November 23rd, was a holiday here in Japan. I was free all day and I went to Tokyo with Miwako and Rina. We visited Omotesando in the morning. When we were finished they were keen (eager) to go to a museum and then to a movie. That didn't appeal to me so, I said "Tootde-loo" and walked down the Meiji Douri to Shibuya station. I wanted to see the famous Hachiko statue and the street crossing. I also wanted to see what there is to see around the station. It was a fine day and I walked at a leisurely pace (easily).I became hungry so I stopped into a restaurant called The Fisherman's    Market. It was very interesting and I'll tell you about it in tomorrow's BLOG. After lunch I got to Shibuya and crossed over to the east side of the station. I found several scrambled crosswalks before I finally found the real one. There were hundreds of people there waiting. They all crossed the street when the light turned green for them. It was FASCINATING!. Lots of foreigners were talking selfies and movies of it. Then I went to Hachiko, the dog statue. Again, lots of foreigners were posing with him and taking pics. I then cruised around the station while looking at my map trying to orient myself. I was pretty confused.