Coming of Age Day Japan. According to wikipedia:

Coming of Age Day (成人の日, Seijin no Hi) is a Japanese holiday held annually on the second Monday of January. It is held in order to congratulate and encourage all those who have reached or will reach the age of maturity between April 2 of the previous year and April 1 of the current year, and to help them realize that they have become adults. Festivities include coming of age ceremonies (成人式, seijin-shiki) held at local and prefectural offices, as well as after-parties among family and friends.
Well, I went to Saitama Super Arena on January 13th at 11am. Why? Because I wanted to take pictures of all these young, cool people. I have done this several times before. Of course, we have gone through this with our two daughters. Anyway, when I arrived at the station, at first I didn't see many people. But when I got to the station, WOW! Those young adults were everywhere. I looked for groups. Then I would approach them and ask "Are you Seijins?" They looked surprised then answered "Yes". Next I asked "May I take your picture?" They were more than happy (very happy) to let me take a picture. I was there less than an hour. It was a lot of fun. 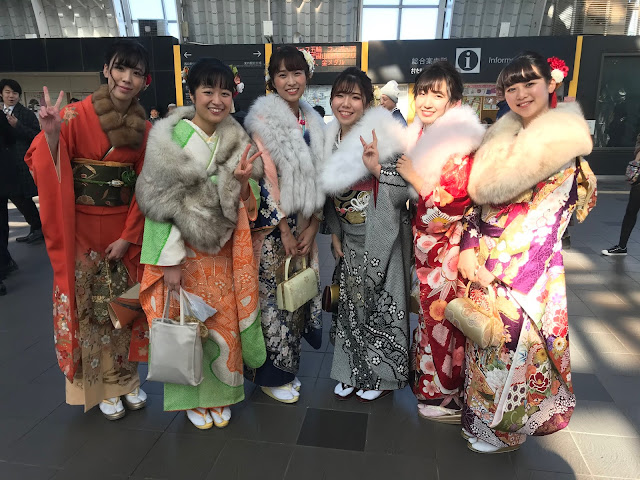