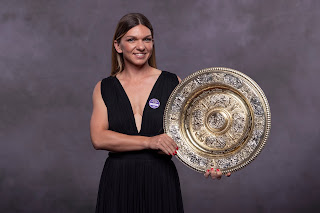 I watched two of the Womens' Wimbledon matches on TV. I was interested in them for two reasons. One reason was that a young American was doing very well in hte tournament. Her name is Coco Gauf. She was born March 13, 2004. She is only 15 years old. I heard about her play and then saw a little on the sports news. So, I caught her match against Simona Halep from Romania. She is ranked #4 in the world. The match was not very exciting. Coco tried her best. She had several nice rallies, but the Romanian was just too good for her. Coco lost in straight sets, 6-3, 6-3. Then I watched the finals. Haleps opponent was another American, Serena Williams (#9 ranking). Do you know here? Yes, everyone knows her. She is big, and tough. And she complains a lot. Well, in this final she did not complain. She didn't have enough time perhaps. The match only lasted 56 minutes. Halep won 6-2, 6-2. At one point in the match Serena yelled out long and hard when she won an important point. But that was her only 'Hourah' (chance to celebrate). Maybe next time, Serena.
Posted by ramesrick at 8:00 AM