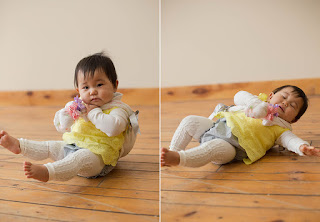 I had a special event with my family last Sunday. It is called the
"Ishiou Mochi Ceremony". Haruki, my grandson, was one year old on February 19th. So, we did it. Do you know this ceremony? It is done on a child's first birthday, wishing for the child's happiness. Actually we used bread instead of rice cake. "Ishiou" is about 1.8 kg. And, "Ishiou" means "a lifetime" in Japanese, and "wishing for a lifetime of never having to go hungry." We made Haruki carry it on his back and made him walk. He cried. But that's cool. Next, after Ishiou bread, ERABITORI ="choose one" to tell the future of children. We put several fortune cards on a tray and he chose one. Objects were drawn on the cards. They have special meanings. They are:
Scissors: become skillful with one's fingers.
abacus: become good at business.
pencil: proceed to the path of study.
ruler: methodical; steady.
purse: become rich
comb: sense of beauty
bowl: sportsman
Haruki chose "pencil". We wish him a life full of happiness.
Posted by ramesrick at 8:00 AM