A trip to Ueno 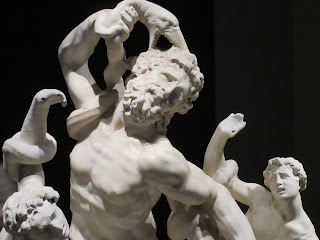 Two Sundays ago, I was home alone. So, I decide to take a trip to Ueno. Why Ueno? Because it is relatively close. It takes approximately 40 minutes to get there. So, I got my summer uniform (T-shirt, shorts, arm covers, sandals, neck towel and hat. Then I got my camera, novel, wallet and bag and set out. I went by bike to Okegawa station and parked it in the MINE department parking. I got the train at Okegawa station and off I went. At first I  planned to go to the zoo. But I saw the National Museum of Western Art first and checked it out. The special exhibition was Michelangelo and the Ideal Body. The admission price was \1,600.  The Permanent Exhibition was \500 to see it. I decided to splurge (spend the extra money) band see Miche-chan's  works. But, it was also works of many different artists. The main theme was counterpoised.
About Michelangelo Buonarroti: He lived from 1475 to 1564. This was during the Age of Enlightenment. He was called a god-like artist for the mastery of all three major artistic forms - sculpture, painting and architecture. His Sistine Chapel ceiling's image of the Creation of Adam and his fresco of the Last Judgment  are renowned worldwide. And yet he always referred to himself as a sculpture.
The exhibition was interesting.