Trip to Tunisia By Kazuko Part 1

To Narita
I got on a limousine bus to Narita airport as usual on February 19th. Surprisingly, I was the only passenger! So, the bus became a chartered one. I felt very sorry for the driver.
The Flight
I thought the airport would be empty. But there were more people than I expected even though it was late at night. I arrived in Tunis, the capital of Tunisia, on schedule. It took about 23 hours in total including transit time. It's so far away!
Weather
It was fine almost every day. The sky and the Mediterranean sea were a beautiful blue. In the day time, it was warmer than Saitama. But from the evening to the early morning it was cold. 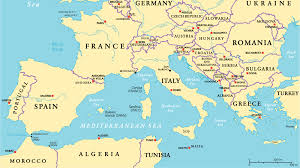